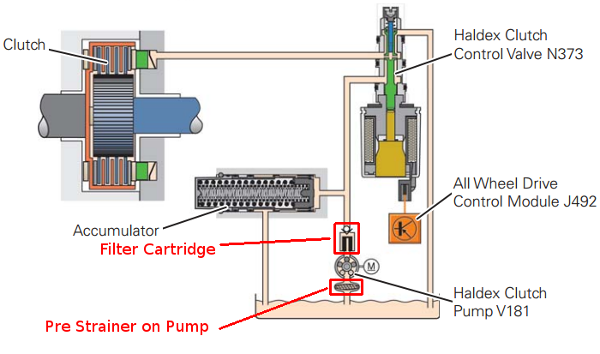 VW Audi reduced the specification of the Generation 4 Haldex System by ditching the pressure sensor which Generation 2 systems had, this detected how much oil pressure the pump and filter system was delivering. It was a diagnostic sensor, it had no purpose other than to detect system failure. Without this sensor the system is blind to it’s pumping/pressure delivery efficiency. Secondly, VW / Audi never designed or manufactured the Generation 4 Haldex system, thus have overlooked it’s servicing and maintenance requirements. 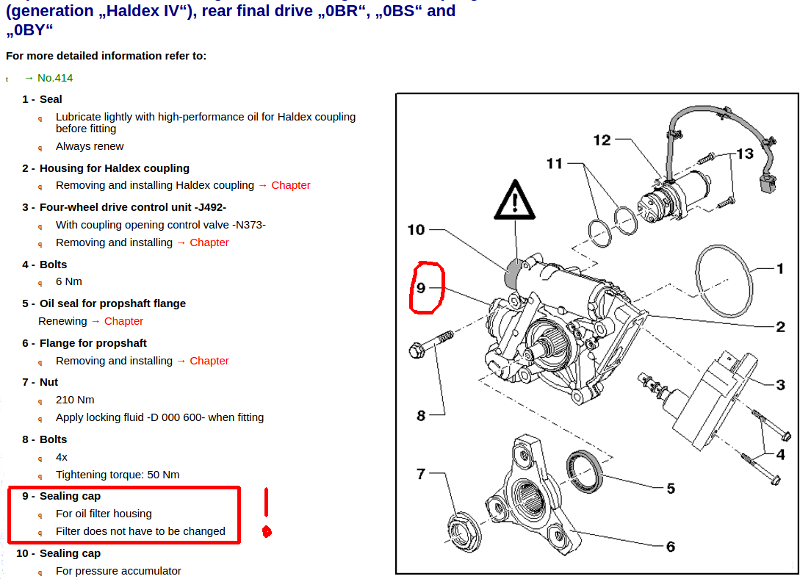 When the ABS/TC/ESP ECU detects the front wheels are rotating faster than the rear wheels by the ABS wheel speed sensors, the Haldex ECU is told to engage the Haldex Clutch pack, thus engaging the 4wd system. It is very fast at responding, it typically engages the 4wd system after around 90 degrees of front wheel slippage. It then holds the 4wd system engaged until the Torque request from the Engine ECU drops. The system disengages if the foot brake or the handbrake is engaged.

The Haldex system is not manufactured or designed by VW/Audi group. It has been out sourced from Haldex Drive Train systems. The Haldex ECU is programmed and the PCB customised to specification to VW/Audi group. Although the ECU’s look externally identical to Volvo, Landrover, Vauxhall and Ford ECU’s, internally they have different areas of the circuit board populated and have different firmware/flash on the micro processor making them talk different communication protocols for different manufacturers. 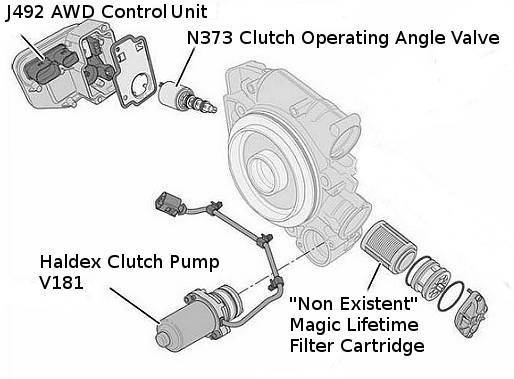 To diagnose and work on Gen 4 Haldex equipped VW/Audi Vehicles, the workshop must use either VAGCOM/VCDS (preferred) or “after market” scanning equipment which can connect directly to the control unit ID “22 – AWD”, and can read the live data from the ECU and run the output tests on the “Valve for Controlling Clutch Operating Angle (N373)” and the “Haldex Clutch Pump (V181)”. Such equipment would be Launch Pro X431, Autel Maxisys MS908, some of the Snap-On scanning equipment, Bosch KTS, and Delphi/Autocom DS150E. After market equipment named above have various functionalities depending on version and software updates.

Causes:-
The pump runs every 20 seconds or so to keep the system primed, the ECU powers up the motor for 2 seconds and turns off again.
This causes the brushes to wear out, typically this can be proven by running the pump with VAGCOM/VCDS using the output test function.
If the pump will not run, gently tap the pump a few times with something metal, typically the pump will jump back into life. This is not a fix, this proves the pump is defective.
You can test the pump with a multimeter set in the Resistance “ohms” setting, and connect it to the two terminals in the pumps multi plug, polarity does not matter.. A good pump will measure between 5 and 8 ohms. Below or above this spec highlights a defective pump. 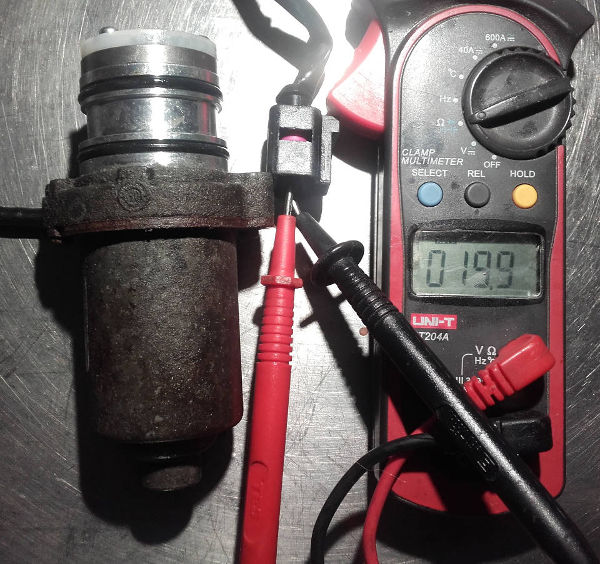 Bad pumps often read very high resistance values, very low, or open circuit. Connecting 12v to the pump to make it run is an option, but it is far from any kind of conclusive test method. Some pump will be intermittent open circuit, e.g. they test OK some power cycles then test out of spec the next, this is due to worn motor brushes and commutator.
Pumps burn out typically because the filter clogs up with scum. Typically cars clog the filter between 45k and 80k miles. But I have seen a Golf R with just 17k miles on the clock with a clogged filter. There is no set mileage, more down to activation/use of the Haldex clutch pack.
If replacing the pump ALWAYS replace the filter. It is a consumable, and if clogged the new pump will burn out in a short amount of time e.g. weeks/months. 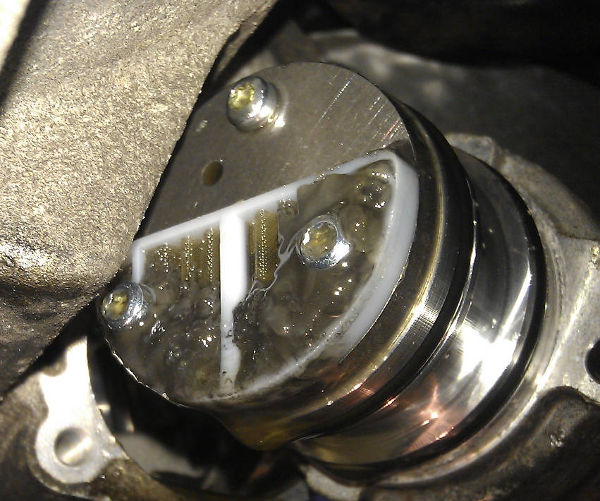 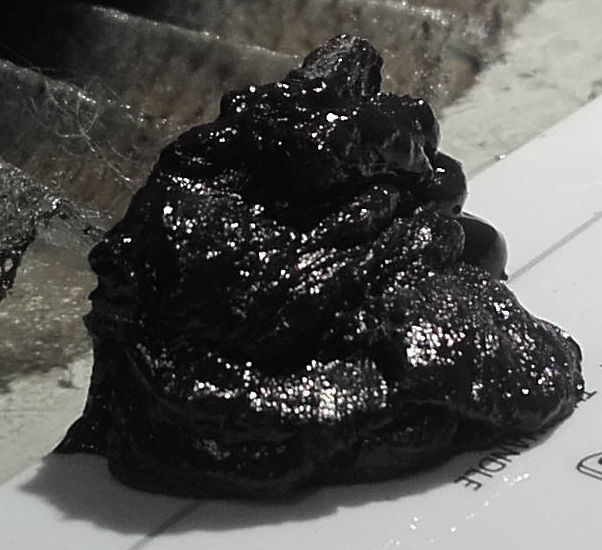 Causes/Diagnosis:-
The clutch pack wear material is suspended in the Haldex coupling oil. Firstly large particles get filtered out by the pre-strainer on the pump, then the finer residue/particles get filtered by the cartridge filter. According to VW/Audi this filter does not exist!!
Because oil is not passing through the filter cartridge, the oil pressure required to clamp the Haldex clutch pack together under load is not being delivered. Thus the clutch pack slips (causing more wear and clogging the filter further!) thus the ABS/ASC/TCS system detects the front wheels are rotating faster than the rears, which should not be possible with the Haldex clutch engaged, thus the fault codes generated are focused on the Clutch and the Control Valve n373.
CAUTION – a Haldex pre change pump V181 which no longer delivers good oil pressure will also give the same symptoms, and typically testing above or below the 5 to 8 ohms resistance specification.
Jumping/skipping wheel when turning tight corners in car parks etc.
A binding sensation when doing tight turns. 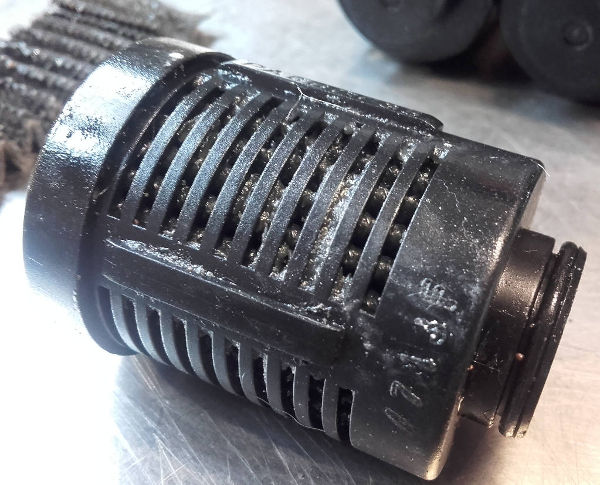 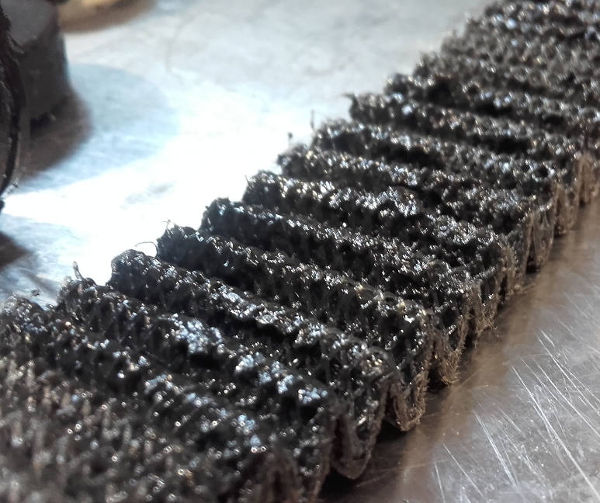 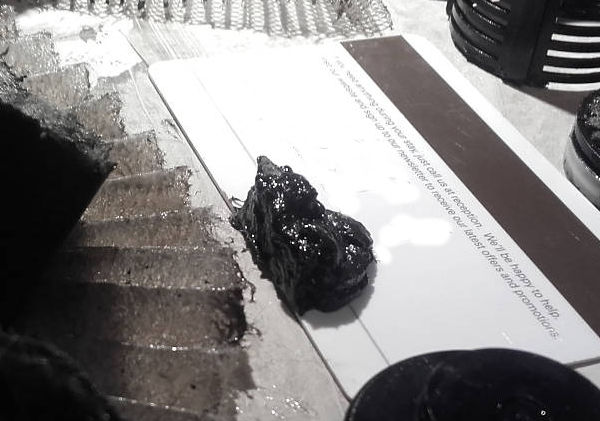 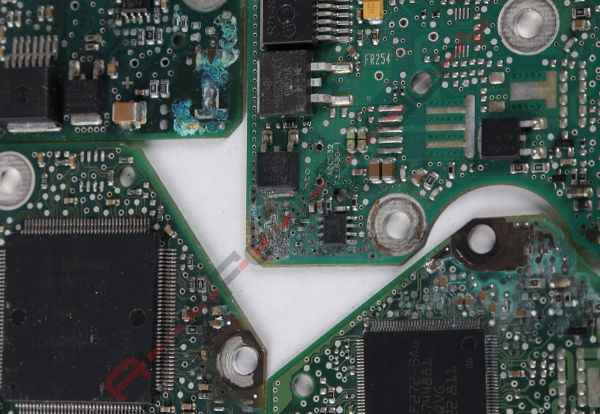 Diagnosis:-
This can manifest itself in sneaky ways on Generation 4 Haldex vehicles. It can give any of the fault codes above, and even pump fault codes. As it depends which area of the circuit board is either corroded and/or burnt out.
The most simple way to prove the ECU is at fault is to open the ECU up. To do this, cut away all of the black rubberised sealant from the front cover, GENTLY prise off the lid – do not shove anything under the lid – do not scratch the circuit board or components. Then inspect the ECU’s circuit board carefully for corrosion or burnt components on the bottom front edge of the circuit board. Around 15% of all Generation 4 Haldex failure cases have been defective ECU’s. I can test these ECU’s, and many are viable for repair – depending on how bad the burning and/or corrosion is. 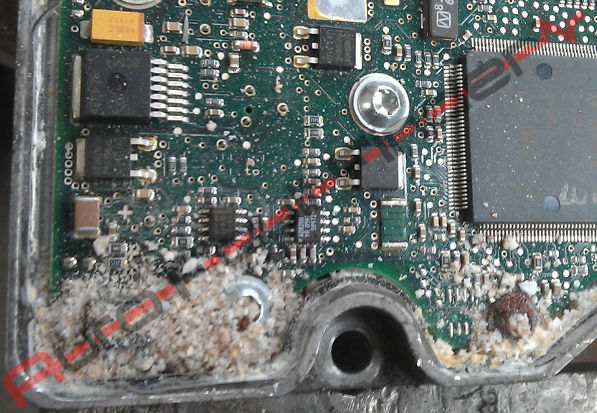 Resolution:-
Repair or Replace Haldex ECU
Replacing filter and oil is advisable
Often pump is at end of service life too